Published in 1879, Her Benny, was written by Methodist Minister Silas K Hocking. Benny Bates and his sister, Nell, were allegedly based on real children he encountered during his ministry in Liverpool. This extract describes the Scotland Road neighbourhood where his characters lived.

On the western side of Scotland Road, that is to say, between it and the Docks, there is a regular network of streets, inhabited mostly by the lowest class of the Liverpool poor. And those who have occasion to penetrate their dark and filthy recesses are generally thankful when they find themselves safe out again. In the winter those streets and courts are kept comparatively clean by the heavy rains; but in the summer the air fairly reeks with the stench of decayed fish, rotting vegetables and every other conceivable kind of filth. 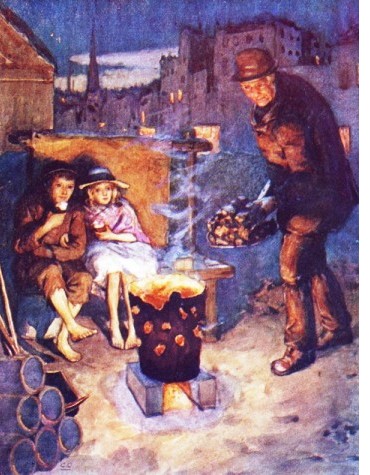 Benny and Nell warm themselves by the nightwatchman’s fire

The children that seem to fairly swarm in this neighbourhood are nearly all of a pale, sallow complexion, and of stunted growth. Shoes and stockings and underclothing are luxuries that they never know, and one good meal a day is almost more than they dare hope for.

Cuffs and kicks they reckon upon every day of their lives; and in this they are rarely disappointed, and a lad who by dodging or cunning can escape this daily discipline is looked upon by the others as ” ‘mazin’ cute.”

To occupy two rooms is a luxury that only comparatively few families indulge in. why should they pay rent for two rooms when one will answer the purpose?

“We know a trick worth two o’ that,” is their boast.

And so year by year they bid defiance to all law and authority. The police rarely, if ever, venture into this neighbourhood alone, or if one should be so foolish enough to do so, he has generally to pay dearly for his indiscretion.

House agents and policemen are objects of special aversion. A friend of ours, some years ago, came into considerable property in this neighbourhood, and employed a young man who was new to the work to collect the rents for him. On entering the first house the agent was confronted by a big, villainous-looking man, who demanded in a surly tone what he wanted. “I am come for the rent,” said the agent. “Oh, you have, have you?” was the reply. “Yes.” 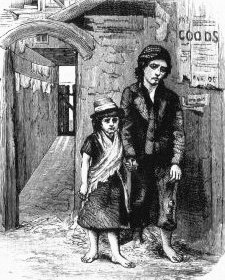 “Ah! Did anybody see you come in?” “No.” And instantly, seizing a huge poker and waving it in the air, he shouted to the affrighted agent, with a terrible oath. “Then I’ll take care nobody ever sees you go out.” This had the desired effect, and the terrified agent escaped for his life. At the next house at which he called he was received very blandly. “So you have come for the rint, have you?” “Yes, that is my business.” “Ah yes, indeed, very proper. Could you change a five pun’ note now?” “Oh yes.” “That will do.” Then raising his voice to a loud pitch the shouted, “Mike, come down here: there’s a chap that ‘as five pun’ in his pocket; let’s collar him quick!” And a second time the affrighted agent fled, and gave up the situation at once, vowing he would never enter any one of those streets again while he lived.