Jim recalls many of his old neighbours in Upper William Street and Princes Walk.

Of course everybody in the courts knew each other; the houses were more or less open for the children to wander in and out, especially when there was any chance of jam butties being on show! People mixed up well, though naturally, now and again, there were differences, and there was lots of inter-marriage between the courts.

We knew all the people in the various courts. In our court, there was; starting off with our own family, the Fitzsimons, next to us, the Cullens, one house after that was the Campbells, and the top house very close to the toilets were the Neils. Facing them, down the cellar was the McCrystals. Then the next house was the Pearsons. I forget who was next to them. But right facing our house (we were number six) in number 2, were the Murphys. We were more or less like one family. My mother was very like the mother in that particular house. My mother had red hair and the lady in the other house also had red hair. They were the Murphys.

The Neils lived next to the toilet. They were the top house. They were more or less quiet, the father was very quiet. I remember the mother, at times on Fridays, she was a dab hand at making fishcakes and we often went up there and got fishcakes. There was Barney Neil – and I think it was Percy Neil, who got captured by the Japanese during the war. He never got back until well after the war and he was actually very sick.

Facing Neils were the McCrystals. I remember as a child they had a very elderly person living with them. She’d sit on the top step next to the parlour. McCrystals were well known in that they had a little shop down the cellar. In that shop they sold basic things like loose sugar, tins of condensed milk and sweets. As the years rolled on they came up with the idea that, coming Christmas, they’d form a sweet club where a child would go in and pay a ha’penny or a penny until he reached the amount of one shilling. That one shilling bought him a Christmas club with sweets and chocolates for Christmas. So that was very handy.

The Murphys had three or four boys. One about my age was Jimmy Murphy. They called him a terror; he got the nickname ‘The Terror’. He was a bit wild really, but quite a nice lad nevertheless, and very friendly with me.

In what was called the middle court there was Patrick Crummy, a big, tall lad, very nice. They had quite a big family. I think there was about four girls and two boys.There was another chap, a born leader. Pat Gillen his name was, very athletic. Next to them was a family called the Masseys, just a couple and one son.

Further down their court was a boy called Joe Rogan He was a good boxer and was coming on in Liverpool but unfortunately the war broke out and that was the end of him as a boxer.

Also in the middle court were the Butlers. They had three or four children. They were a mixed family

In the bottom of the court there was a family, a bit on the elderly side, I can’t remember their name.

So if we move on the middle court and go down to the bottom again, there was The Flanagans, the Walshes, and the Delaneys. When the people moved he moved to Huyton one of the Delaneys became a city councillor – more or less Lord Mayor of Huyton. It was uplift for him from the poor streets that we lived in. 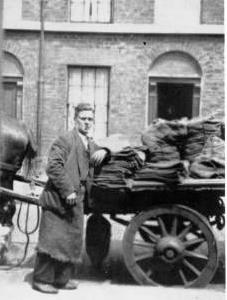 In Princes Walk there were some characters.

There were the Carberrys. They were pretty well known in the parish because one of them was quite a good boxer and he fought in the old Liverpool stadium, it’s now where the Odeon is. It was one of the places we used to go and watch the boxers.  Boxing was very favourable in those days,

The Yateses were a relation to the McCrystals, they intermarried. Eventually we knew the Yateses because when the parish broke up after the war and people were distributed round Huyton and Norris green, the Yateses came to live in the same road as us in Huyton where many where many old St Augustines people moved to.