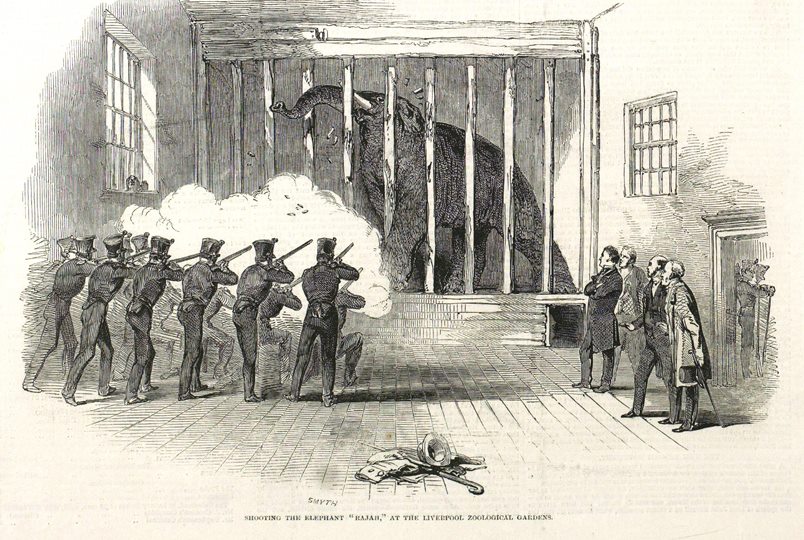 LATE ACCIDENT AT THE ZOOLOGICAL GARDENS

On Saturday, a painful feeling was excited in Liverpool by a report that the stupendous elephant, Rajah, at the Zoological Gardens, had again destroyed his keeper. The facts were ascertained to be as follows: – About ten o’clock, Richard Howard, the keeper, was in the den with Rajah. One of the holiday visitors from some of the neighbouring towns was in the house watching the manoeuvres of the animal, who, having in some way or other displeased his keeper, was struck by him. Rajah resented the blow, struck the man to the ground, and crushing him with one of his feet, he broke almost every rib in his body. The stranger immediately gave the alarm, but it was too late—poor Howard had ceased to live.

Our readers have already been informed that Mr. Atkins, the proprietor of the gardens, died but a few days ago and that the management had devolved upon his sons, Mr. J. and E. Atkins. The melancholy circumstance was immediately conveyed to them. It was instantly determined that the animal should be destroyed. Mr J. Atkins waited upon the Mayor, and received from him an introduction to the commanding officer of the district, who, at the request of Mr. Atkins, immediately despatched a company of Rifles from the barracks for the purpose of destroying the elephant.

In the meantime, several medical men had been consulted, including Dr. O’Donnell, and Messrs. Owen and Cooper, surgeons, with the view of administering poison to the animal. Two ounces of prussic acid and 25 grains of aconite (monk’s hood) were administered on buns and treacle.

For a few minutes Rajah betrayed symptoms of sickness, hut no other effect was visible, and he appeared soon after to recover his usual health and activity. After the lapse of three-quarters of hour it was deemed advisable to dispatch him by shooting him. The house was ordered to be cleared of all save the soldiers, twelve of whom presented their arms. Rajah turned round when he saw the rifles presented at him, but on again presenting a fair view for shot the pieces were discharged, and he reeled, uttering at the same time a loud growl.

Twelve other soldiers immediately took the places of those who had fired, and, presenting their pieces, fired at the first fair opportunity. This brought the animal to the ground. Another body of soldiers entered the house, but it was found a vital place had been touched, and one of the most magnificent elephants in Europe, whose docility and intelligence had been the theme of admiration, was dead.

After the melancholy accident, the elephant betrayed no symptoms of restlessness. He was tractable and quiet as usual, and the rumour that he had gone mad was without the slightest foundation. He had been for about dozen years in the possession of Mr. Atkins, who paid £800 for him when but very young, and his value at the time he was shot must have considerably exceeded £l,000.

An inquest was held the body of Howard on Tuesday, when it appeared that the deceased had ill-treated the animal, and on the morning of his death had struck it a savage blow on one of the tusks. After it had killed the keeper, the elephant ate the broom, well as the stick, but was perfectly quiet.

The Coroner, in summing up the evidence, expressed his regret that the Messrs. Atkins should have ordered the elephant to be destroyed, for it was quite clear that it had killed the deceased in consequence of the ill treatment which it had received at his hands. The jury, after a brief deliberation, returned the following verdict: ‘We are of the opinion that the deceased came by his death in consequence of having beaten the elephant unmercifully thereby causing the animal, in his fury, to kill him.’ The jury expressed their concurrence in the views of the coroner. The animal was dissected on Tuesday.

OPENING AND DISSECTION OF THE ELEPHANT.

On Monday evening, the elephant was opened in the den, when two very loud reports, resembling the discharge of firearms took place from the effects of the accumulated gases in the body of the animal. On Tuesday the process of dissection commenced in the presence of a great number of spectators, including upwards of twenty medical gentlemen, who were attracted by the somewhat novel character of the operation.

There were few traces of the effects of the strong poison which had been administered, but the offensive effluvia was almost unbearable, so much so that one of the persons engaged in dissecting the animal, who entered the carcase after the offal and entrails had been cleared away, was almost immediately compelled to leave it, and fainted from inhaling the noxious gases.

The enormous size of the beast was at this time seen to the greatest perfection, the interior being sufficiently capacious to admit two or three full grown persons. The dissection being completed, the different parts were removed as quickly as possible to a field, or croft, adjacent to the gardens, and it required no small degree of strength to move some of the limbs from the den into the cart which convoyed them away.

The head and legs each required the services of half a dozen strong men to hoist them into the cart. The whole was cleared out of the gardens about nine o’clock on evening, and on Wednesday the flesh of the animal, which alone weighed from two to three tons, was taken away in a cart, drawn by two strong horses, and we learn is to be converted into patent manure.

The head, bones, and other portions of this immense beast, have all been carefully preserved, and it is the intention of Messrs. Atkins to place them together again, and form a skeleton, which will be placed the garden as one of the objects of attraction. During the process of dissection not one of the balls out of the twenty-four discharged at the elephant was discovered.