The 2nd Battalion was thrown into the fight on 12th June, two days before the second phase of the Battle of Messines began, when it took over the portion of the front line held by the 16th Australian Infantry. The work of consolidation had not gone far and there were very few trenches worthy of the name as yet in existence, with the result that arrangements for protection had to be improvised as best they might.

On the June 13th orders were received for the renewed advance, the objective of which was a line extending from the Ferme de La Croix, just to the north of the River Douve, to the Ferme Steignast – a front of about 1200 yards. The task of the battalion was to capture the Ferme de La Croix and secure the northern bank of the Douve.

The attack started at 7.30 p.m. on the 14th and the supporting artillery, instead of the creeping barrage which had been arranged, put down a standing curtain of fire on the farthest objective – a line of trenches well beyond the Ferme de La Croix. The result was that the companies had to deploy hurriedly and double as fast as they could to reach the positions they had been trained to observe, forty yards behind the barrage. This turned out to be a fortunate mistake, for the swiftness of the advance caught the enemy napping and many of them were surprised in their shell-holes. On the other side of the picture, however, the mistake by the artillery had left a number of German machine-gun nests untouched and these were a great source of trouble, particularly in the neighbourhood of the Farm. This locality was the objective of ‘D’ Company, commanded by 2nd Lieut. H.E. Howse, and this company did great work in outflanking the various centres of resistance and driving the enemy out with rifle-grenades. It was during this phase of the battle that Private William Ratcliffe won the regiment’s third Victoria Cross of the war, when a party of Germans who had been driven into the ruins of the farm building were resisting stoutly.

Writing shortly after the battle, Brigadier-General Baird, commanding the 75th Infantry Brigade, described Radcliffe’s gallant deed as follows: ‘Private Ratcliffe was an old soldier with the South African war medal. He was a stretcher-bearer and had done distinguished service on the Somme, where he earned the Military Medal. In this attack he was following his platoon and, on reaching the first objective, saw a Boche machine-gun in action that had not been mopped-up and was firing into the flank and rear of his comrades. He at once dropped his stretcher and, seizing a dead man’s rifle, went straight for the machine-gun and bayonetted the German officer and five of the crew. He then picked up the machine-gun and some ammunition and ran after his company, and when they had got the final objective he brought the gun into action against the enemy. He then went back and got his stretcher and spent the rest of the night bringing in the wounded through a heavy barrage.

Never was the spirit of service and gallant devotion to duty more strikingly exemplified than by this fine old soldier.

The above account was copied from ‘History of The South Lancashire Regiment’ and supplied by Major T J Farrington. (1997)

Among the gallant deeds which have been rewarded by the bestowal of the V.C is that of Private William Ratcliffe, of the South Lancashire Regiment. Private Ratcliffe is a Liverpool man who has spent nearly half his life with the colours. He is thirty three years old, and soon after his seventeenth birthday was out in South Africa fighting the Boers. After the signing of peace he chose to remain in the Army, and finished his eight and a half years’ service abroad in India, after which he spent three and a half years in this country. On his discharge he went back to the river, where he had been employed as a lad, as a docker, and has now the distinction of being the dockers’ first V.C

In August, 1914, he was one of the first to answer the call for recruits. He needed no “dragging in by the teeth,” as he said in a letter home. Out in France he quickly gained a reputation for dauntless bravery. He was in every big battle from Mons to Messines and crowned many feats of daring by despatching in a few hours on Messines Ridge at the beginning of last June seven German snipers.  For this and his general gallantry he was decorated on the field a few days later with the Military Medal.

In peace time Private Ratcliffe’s home is in Brindley Street, Toxteth Park, a typically dark, narrow, little thoroughfare wedged between the docks on one hand and a sky scraper brewery on the other.

A “Daily News” representative who went there found singularly little that was suggestive of the hero. His married sister, with whom he lives, knew little of his deeds at the front, and that little had been gained from soldier friends who had called in passing. She had a story about his overawing a German officer, relieving him of his revolver, and, most important of all, selling it for 75 francs and having a jollification on the proceeds. But nothing about the exploits that will make his name famous – or almost nothing.

There was a reluctant little note scribbled in pencil: “I got the Military Medal today. The general pinned it on my breast. He said he would see about another one. We can get no fags out here.” Then followed a row of “kisses” and an injunction to “mind the barbed wire.” It was left to the reporter to bear the news that the “other one” was the most coveted distinction the country can bestow for services in war time.

The conduct for which Private Ratcliffe has been honoured is described officially as follows:-

For most conspicuous bravery.  After an enemy’s trench had been captured , Private Ratcliffe located an enemy machine gun which was firing on his comrades from the rear, whereupon, single handed and on his own initiative, he immediately rushed the machine-gun position and bayonetted the crew. He then brought the gun back into action in the front line. This very gallant soldier has displayed great resource on previous occasions and has set an exceptionally fine example of devotion to duty.

One of the officers of the South Lancashire Regiment, who has since died of wounds, paid a striking tribute to the daring deed by which Private Ratcliffe won the V.C.

“We had a hot time of it. We fought our way through a torrent of shell fire, and found ourselves raked flank and rear by machine-guns posted in commanding positions. One of the deadliest of these troublesome guns was posted in the rear and was playing havoc with our troops.

Ratcliffe asked permission to have a try at capturing it. I am not sure that the permission was given. In fact, I think it was refused, but that did not matter to Ratcliffe.  He dashed straight at the position, and tackled the crew of the gun on his own.

After a fierce struggle he killed or drove them off, and then picked up the gun and started back with it.

He was fired on at once by the enemy, and it was a miracle how he got through, for all the time the bullets were raining around him and we never expected him to get through it.

Once he tripped and fell. We thought he was done for. He wasn’t. He rose again, and with a rush covered the last stretch of ground between him and safety.

When he got to our position he set up in business as wholesale strafer of the enemy with his gun. Every time they tried to rush him they were met with a galling fire and he fairly knocked them out. They hadn’t forgotten him for capturing the gun and they concentrated all their efforts on knocking him out.

Snipers were there by the dozen after him, and another machine-gun sent bullets spitting all over the place where he was. Ratcliffe never wavered. He stuck gamely to his post, and his action made things much easier for us all round.”

Memories of our docker V.C.

Although Private Bill Ratcliffe died in 1963, the years have never effaced him from the memories of the handful of men who were his comrades in the 2nd Battn. South Lancs. Regiment at Passchendale on July 31, 1917, when Bill won the Victoria Cross. *

Hugh Higgins, of 21 Ruskin Street, Liverpool 14, who was sergeant in charge of the “D” Company platoon which had Bill Ratcliffe as one of its stretcher bearers, reminded me today of how the modest Liverpool docker gained the war’s highest award for gallantry.

“At four o’clock in the morning we went ‘over the top’ and our objective, a couple of miles ahead, was eventually reached at a cost of more than half strength” said Hugh.

Bill and his mate, Sam Calvery, were kept very busy with the many casualties.

Our next job was digging in, but this was almost impossible due to the heavy rain turning the ground into dough-like clay.  The Germans kept up a heavy shelling and machine-gunning of our position to add to our problems.

Then a headquarters orderly came to us and said there was a German pill-box full of Huns behind us.

Immediately, Bill took a rifle and a bayonet, plus a couple of Mills bombs and went back to find it.  He was away some time and when he returned he hardly mentioned what he had done.

It wasn’t until later we found out that he had, single-handed and on his own initiative, rushed the machine-gun position and bayoneted the crew.  He then brought the gun back into action in our front line.

Meantime we were still trying to dig into the thick clay. Bill lent a hand until he was knocked out by a machine-gun bullet in the shoulder.  I dressed it and sent him down the line. 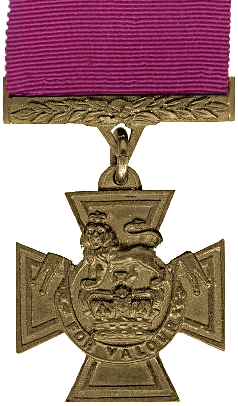 Bill and I were firm friends from 1914 until his death at the age of 80 four years ago.  He never married,” said Hugh Higgins.

Incidentally, before getting the V.C. he gained the Military Medal at Messines Ridge while in my platoon in June. 1917. by counter-sniping and wiping out seven enemy snipers who had been taking heavy toll of us.”

* Note: the date and place of William Ratcliffe winning the VC is given incorrectly in this report. He won the VC at Messines on 14th June 1917 not at Passchendale on July 31 1917.

The painting below, shown by kind permission of the Lancashire Infantry Museum at Fulwood Barracks shows VC winners from the South Lancashire Regiment. William Ratcliffe is third from the left. 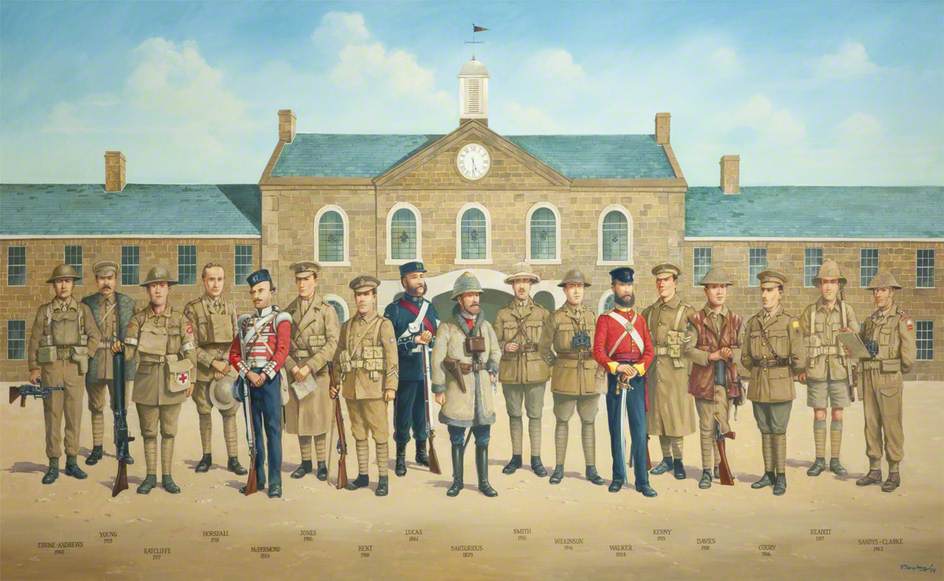